skip to main | skip to sidebar

Orator Sapientia Has moved to Wordpress!

I will not be posting here on blogger anymore. I will leave this page up to redirect people, but my official artblog is now at the following address:

http://valerieherron.wordpress.com/
Posted by Valerie Herron at 11:04 PM No comments:

I love reading about the processes of other artists. Most of the time I don't have the foresight to document my process as I work on a piece, but I actually took the time to do it this time. Here are some photos of the process behind my newest painting, Circe: 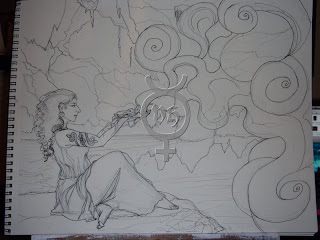 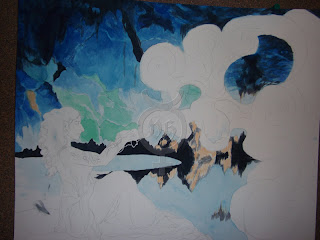 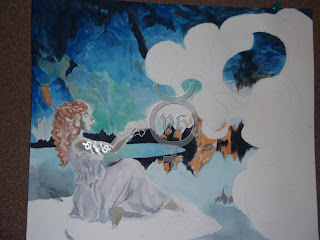 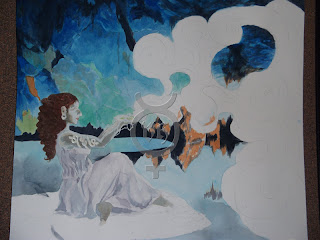 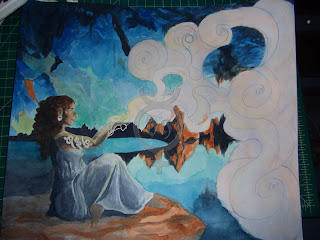 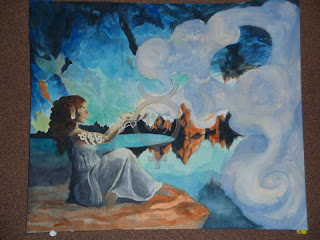 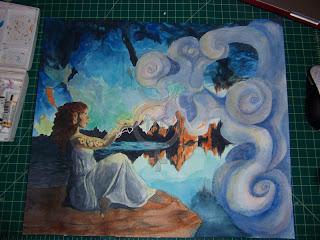 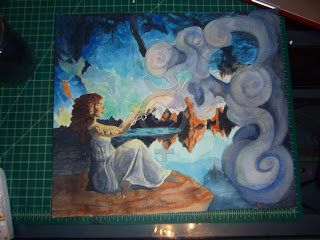 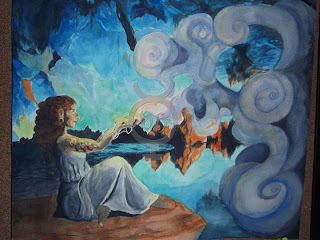 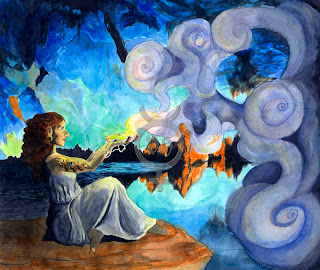 For my Final in Narrative Image, I decided to create a triptych on the themes of Life, Death, and Rebirth. For each panel, I wrote a piece of prose. This is all LOADED with symbolism, and I don't even want to begin to deliver a dissertation on it here. I figure these sorts of images are more enjoyable for people when they can come to their own conclusions about the symbolism and narrative, anyhow :)
Enjoy! 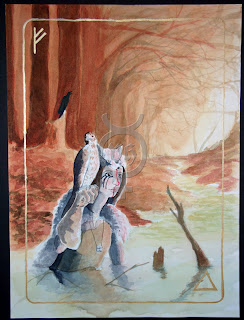 Panel One: Life
watercolor on Arches
Valerie Herron 2011
The magic of the incomprehensible microbe
Blood and teeth and fur and scales
Feathers venom bones and filth
We all come into this world swinging
Swaddled in the sling of physics
we dance in that all-night party of the pulse
and traverse the sinewy synoptic pathways
by cognitive torchlight
the spark that ignites the shaman in the ape
we create things bigger than ourselves
we are the ephemeral creating permanence. 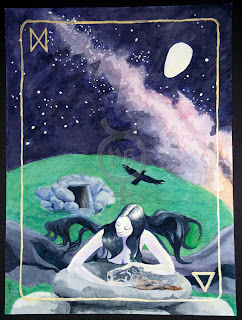 
What will become of me?


Will I glide into the fold of oblivion


Or will I rocket


From zero to infinity?


Is there gestalt if my parts dissolve?


And can there be purpose


For those so soluble?


The Hands Behind the cogs of the Universe


Above me and below me


Inside me and Around me,


From the terrestrial womb we emerge


And into the Earth we all return. 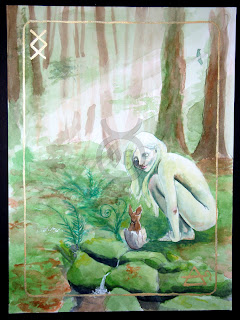 Panel Three: Rebirth
watercolor on Arches
Valerie Herron 2011
We scatter and collide!
We are the earth
We are the sky.
You hear this, entropy?
We can only break
Into so many pieces
to be absorbed
expressed in chlorophyll and granite!
to nourish the larval souls
that only our imaginations will know.
Perhaps.
but we are not unknown to them,
we create things bigger than ourselves
we are the ephemeral creating permanence.
Posted by Valerie Herron at 9:36 PM No comments: 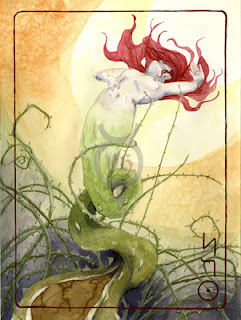 a biting frost which clings a inky slick melts away, falling slowly to what would be peril if not for mutation, but a rose never looks down, time slows not for her: she blooms, she grows, she wilts, and then she is dead, so she sighs a hoary steamy spice and shakes a frantic iridescence, vines twist and thorns sink in and she begins to climb, strangling the thistle, crushing weed, she climbs, undulating petals flow and stretch toward that fever, Sol, ardent growth will never stop 'til she is white light blinded one with everything.
My art, my heart, my everything.
Ego denique opportunus muse.
Meus pectus pectoris est de Sol.
Circumradiant Dawn
Watercolor on Arches
Valerie Herron 2011
Posted by Valerie Herron at 6:26 PM 2 comments:

Lord of the Beasts! 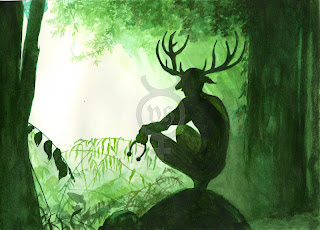 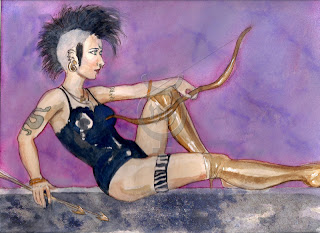 *ATTENTION: While I'm on the subject of writing, please go check out this new novel on Kindle - Eidolon's Wager. Written by the brilliant Dr. Michael Friedrichs. You will not be sorry :)*

I'm currently in a class titled Narrative Image. As you probably gathered from the name, it is a creative writing/illustrating for narratives class.

For me, writing is like dancing. I'm no good at it, but it's fun for me regardless. My first project was to create a piece of flash fiction and illustrate for it. I decided to revise an earlier narrative + illustration that I created. Previously called Black Planet, I decided to go with something even more pretentious this time around: Domos Aidaou. The main difference is that I added a narrator and turned it into an actual narrative as opposed to the description of a scene with more words than necessary. I decided to name the narrator after a favorite musician of mine who recently passed away.

This time around with the illustrations, I decided to create an Audubon-esque illustration of some mutated critters, as the narrator was an old biologist. I think these turned out pretty sweet. 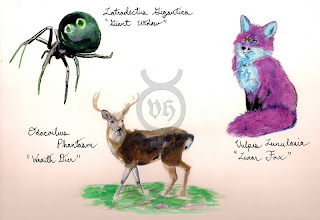 Species of the Domos Aidaou
watercolor on hot-press
Valerie Herron 2011
Alright, if you are interested, here is a bit 'o flash fiction, written by me:

Domos Aidaou
It has been at least a month since I last spoke with another person, and I fear that these might be the last words ever written. It is my hope that this record may be found after my death by some sort of cosmic travelers. In this, my last journal entry, I will tell the story of the end of humanity.
Throughout the whole of our existence, humanity has been obsessed with the end of the world. Despite this careful study of eschatology, from every possible contingency, we brought about our own demise. We were thwarted by our own sentience: our attempt to achieve god-hood with mastery over the microbe, the atom, the elements and nature. From every corner of the globe it was the same: taring away at each other like rats, fighting over life sustaining resources, all hoarded by the upper rungs of society. The lower classes were always lost in the fray. A dark alchemy of industrial contamination, global-scale murder, and the devouring of resources could not be tempered by the last weak efforts of the few toward preservation. Epidemics emerged, the numbers of the dead metastasized like the sicknesses in their bodies. Eco-systems died out and eliminated all sources of food. Desperate wars over the last farmlands and water-sources killed off the majority. In the end, the upper echelons of society were able to buy themselves the luxury of dying last.
I am writing this from an old cabin I had the fortune to discover deep in the woods. I found it when I fled from the city. It is an oddly comforting place. I know that it is just as saturated with radiation as everything else, but the blanket of vegetation that covers it provides a sort of imagined barrier. I feel removed from that contaminated wilderness. The biologist in me yearns to spend my final days wandering this strange world, but I can not find the strength to stand.
A ghostly terrain roles out from the mists, like a real Domos Aidaou. For now the only stirring in this world is the movement of contaminated flora and fauna. The trees hum with a poisonous bioluminescence. Scurrying forth from many generations of mutation, the cacophony of a thousand gnarled creatures can be heard in the darkness. The occasional darting retina can be spied by lurking predators in between glowing branches and leaves. The steaming and hissing of a once toxic steam now gently licks the faces of the horrid creatures and lurching tendrils as they reach into the water for nourishment.
Looking at the tumors in my hands that have formed within days, I can not imagine any other humans could have survived this. I suppose the pendulum always swings. For centuries we were all so worried about the end, we forgot that the planet does not need humans to endure. Though ravished through the ages by predatory giants – from the dinosaurs to humanity – Nature will not be victimized. She will always prevail. I pray that someday the ancient remains of this crumbling domicile will be discovered and this journal within it, lest humanity forever be forgotten with the death of human consciousness.
Dr. Peter Christopherson
7/17/2041

Posted by Valerie Herron at 9:22 PM No comments:

The Art Blog of 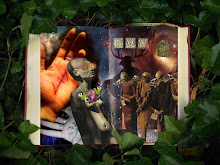 Valerie Herron
Portland, OR
I am a fledgling illustrator and conceptual artist. Currently pursuing a degree in Illustration at Pacific Northwest College of Art (Portland, OR) I'm also looking at grad-schools everywhere from Canada to San Francisco to the UK. In between schoolwork and setting fires, I work on my art, listen to music no one can stand, weave together words in ways only I find pleasing, all the while phasing in and out of corporeality.